Newest, beautiful, single women now added for week of Wednesday, January 20, 2021 - Tuesday, January 26, 2021
During this COVID-19 crisis, be assured we are still working daily to ensure your success!

This Page Has Been Updated and/or Moved

Zaporozhye is the third city stop on the AFA Dnepropetrovsk Singles Tour and some would say we have saved the best for last. We believe you will find the attitudes of these women to down to earth and motivated to make a change in their lives. 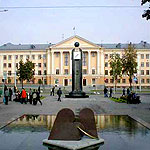 This unique city called Zaporozhye rests on two opposite banks of the Dnieper River. It is located approximately half-way between Donetsk and Krivoy Roy about 600 km south-east of Kiev and about 80 km south of Dnepropetrovsk.

This 200 year old city is a major steel production center specializing in cold-rolled steel, stainless steal and ball bearings. The city manufactures an array of other products distributed both foreign and domestically.

Zaporozhye is situated about 600 km. South-East of Kiev - Ukraine's capital and is located on the wide plains along both banks of the Dnepr River, which gives Zaporozhye its unique atmosphere.

Zaporozhye was founded as a fortress in 1770. The founders of the town - Russian soldiers who had come here with their families became the first settlers of the future town. Among them were also Zaporozhye Cossacks, who founded a large village nearby after the abolition of the Zaporozhskaya Sechin 1775.

The Dnepr fortified line lost its military significance following the victory over the Turkish Sultanate and the annexation of the Crimean Khanate to Russia in 1783, and the fortress was turned into a possad (trading quarter in the suburbs of a settlement). Since 1785 it was called Alexandrovsk after the commander of the first Russian Army, Prince Alexander Golitsyn. In 1802 the town was included into Ekaterinoslav Province and in 1806 became a district town.

Present-day Zaporozhye has over 1 million inhabitants and is the center of a range of industries and the home to Zaporozhye State University. Railways, highways, airlines and water-ways connect Zaporozhye with many cities and towns such as Moscow, Kiev, Kharkov, Poltava, Simferopol and many others. The town stretches out for over 30 kilometers along the Dnepr river, and in its width the new residential districts extend for 25 kilometers.

There is a Musical and Drama Theater, the Theater of Young Spectators and a Puppet Theater, a concert hall, a circus, and a variety of night clubs. The most remarkable sight and the pride of Zaporozhye's citizens is Khortitsa Island, which is the custodian of an antiquity reserve museum and a nature reserve popular with weekend visitors.

You have a wonderful opportunity to enjoy a splendid city at no extra charge and meet really beautiful women who live there.

Discover why more Singles Tour clients place their trust in A Foreign Affair each and every year than any other tour agency!

Now have all your Singles Tour questions answered by one of our Tour Representatives 7 days a week, from 9AM to 9PM MST, by calling our Tour Info line at (602) 553-8178

Newest, beautiful, single women now added for week of Wednesday, January 20, 2021 - Tuesday, January 26, 2021
You have to meet the women to marry them! We have group singles tours departing nearly every month!

Is there any REAL reason to wait?
It's FREE, instant and without obligation to register NOW!

It’s the first step in possibly the most rewarding romantic adventure of your lifetime!